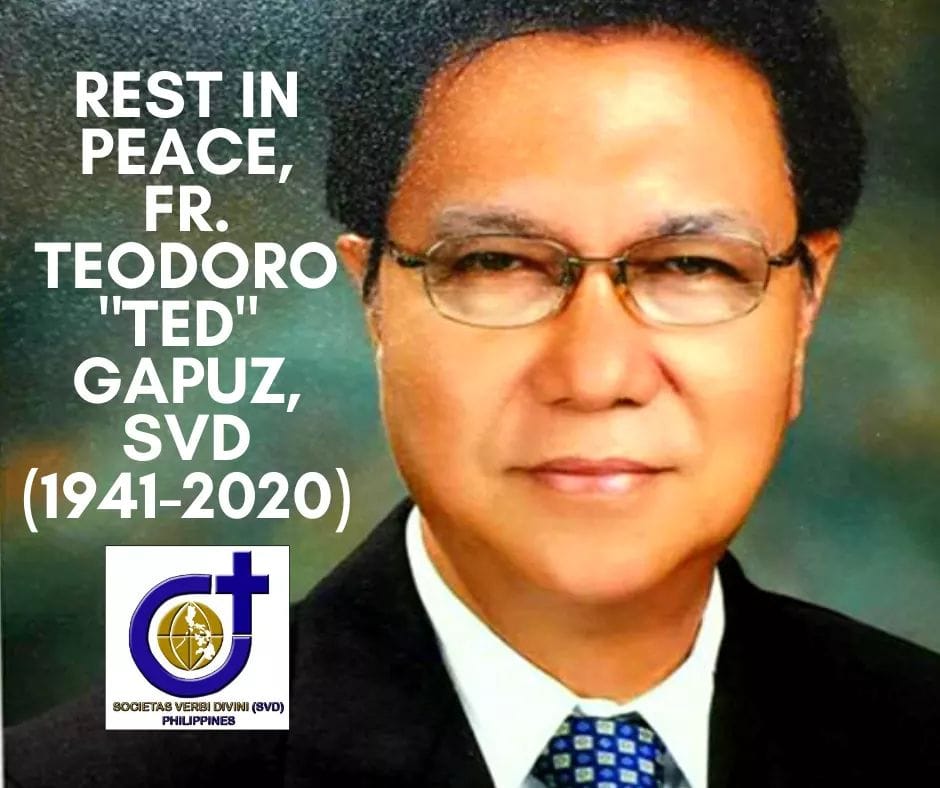 We request your prayers and to offer your mass intentions for the eternal repose of the soul of Fr Ted Gapuz, SVD

The school community will offer a memorial mass on a date to be announced later.

“May the angels lead you into paradise;
may the martyrs receive you at your arrival
and lead you to the holy city Jerusalem.
May choirs of angels receive you
and with Lazarus, once a poor man, may you have eternal rest.”

The love for the China mission has always been closest to the missionary heart of Fr. Ted, although obviously most of his mission assignments, until the time of his death, were spent in school management. He was part of the earliest pioneering group of young Filipino SVDs which was sent to Taiwan for Chinese language and cultural training program. The program has given him the rich opportunity to engage later in the SVD Chinese apostolate in the Philippines.

With the sudden and unexpected death of Fr. Peter Yang in 1997 as founder and director of SJCS, and the enventual retirement of Msgr. Peter Tsao, who later died in 2002, the provincial superior of the SVD-Central province has been seriously considering potential pool of SVDs with experience and adequate exposures in Chinese mission for an important management succession for Saint Jude school and parish. Fr. Ted then was assigned as acting parish priest of Saint Jude parish, with the active assistance of Msgr. Peter Tsao, SVD

Fr. Ted has been at the helm of a very challenging and crucial management transition of both the school and the parish. He was assigned as parish priest in Saint Jude church for almost two terms, a relatively short stint that ended in the year 2000 when he was later transferred to Saint Jude Catholic School as school director until 2006.

He has introduced a more systematic reorganization of the pastoral and management structure of the parish in compliance with the prevailing need and demand of a very unique and complex three-fold character of this church, specifically as a personal parish for the Filipino-Chinese community, a territorial parish for the four small barangays around it, and an archdiocesan shrine of Saint Jude Thaddeus.

With the management changes in place, the church has been more exposed to a wider participation of the SVD in its mission thrust and has created greater interest among young SVDs to get involved in the SVD Chinese apostolate.

Fr. Ted was assigned as director of Saint Jude Catholic School in 2000, at the time when the issue on management succession was the crucial point of a lot of controversies, questions and doubts. Given his stable managerial experience characterized by clarity and determined missionary commitment, Fr. Ted was able to stabilize the school to move forward amid a management change that was not easy for a lot of members of the school community and among stakeholders. The organizational development program that he passionately espoused has given a significant impetus to a more systematic improvement and innovation of the management structure and culture of the school. His management legacy has seen the changes and growth of the school in terms of professional development, innovation, and global competitiveness, the hallmarks of excellent learning institution.

SJCS is forever grateful to Fr. Ted Gapuz. We, as co-missionaries, together with the SJCS community and stakeholders as a whole, pray for the repose of his soul. May God, the owner of the mission, reward the faithfulness of His servant, Fr. Ted, with the promise of eternal life. May Saint Jude Catholic School be blest always with the same commitment to carry out the SVD mission to be witnesses of the Word in the World.