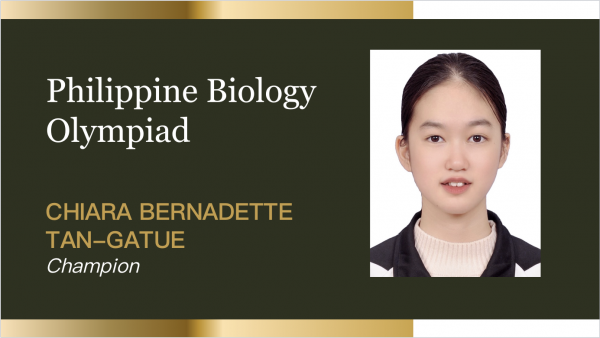 Tan-Gaute to represent PH in IBO in Armenia

Continuing the tradition of excellence, Chiara Bernadette Tan-Gatue emerged as the champion of this year’s Philippine Biology Olympiad (PBO) National Finals. She is now set to conquer the 33rd International Biology Olympiad (IBO), to be held in Armenia in July.

Last year, Chiara secured the second runner-up award in PBO and a bronze medal in IBO. She is the second Judenite to be an IBO medalist. Jeremy Ace Ng secured back-to-back bronze medals in 2020 and 2021.

PBO is the biggest biology olympiad in the country, which selects the four Philippine representatives to the IBO. The first round of the competition, held last January 15, has selected the top 55 semifinalists. Meanwhile, the second round, held last February 26-27, reduced the finalists to 20. Lastly, the final round, held last March 12-13, awarded the top four students.

Dumaoal of IB bags silver in...